Ethiopia is also endowed with diverse wild animal species, some of which are endemic to the political boundary of the country. There are about 284 species of mammals, 861 species of birds, 201 species of reptiles (over 87 snakes, 101 lizards and 13 species of tortoises and turtles), 188 species of fish, 324 butterflies and 63 species of amphibians. There are various literatures with records of the total number of wild animals. Especially the literatures on birds vary from one to another. The most commonly cited number is that there are 861 species of birds in the country. However, recently published book on the birds of Ethiopia and Eritrea brings the number of birds of Ethiopia down to 837 species. The number of endemic and near-endemic (shared with Eritrea) is reported to be 18 and 14, respectively. The discrepancy is mainly the result of the recent taxonomic revision using molecular genetics and a number of subspecies of birds have come out as species. There is a huge knowledge gap on other components of the mammalian fauna owing to the absence of systematic survey especially on the arthropods (other insects in general) where high diversity and endemism is expected from the arrays of diverse ecosystems in the country. 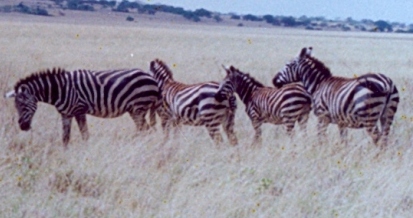 The trend of the terrestrial wild animal biodiversity is variable. In general, there is a decline in the population of most of the terrestrial wild animal species. However, there are some positive developments particularly on some endemic wild fauna that were recognized as endangered.  Though time series data is not available, ostrich, critically endangered species and Swaynes hartebeest and Grevy’s zebra are believed to be locally extinct from the Park. The population sizes of ostrich and Soemmering gazelle have decreased drastically in the nearby Yangudi-Rasa National Park, while Wild ass is highly threatened in the same Park. Wild ass is also found in Mille-Serdo Wildlife Reserve around Umdurur in Afar Region but very rarely seen. Endemic bird species such as Yellow throated seed eater in Awash Park and Roujet’s rail in Bale Mountains National Park are highly threatened. The IUCN (2009) uplisted Sidamo Lark to the category of critically endangered from its previous conservation status. The status of a recently discovered monkey Chlorocebus djamdjamensis (previously known as Cercopithecus aethiops djamdjamensis), which is endemic to Ethiopia and found in Bale mountain is unknown. Migration of wild animals from Dolo Odo area of Somali Region (around the boarder to Kenya), which is triggered by increased hunting threat is reported as a factor seriously affecting the wildlife resource of the country in general and of that area in particular. Previously the Somali clan in that area didn’t have a culture of hunting wild animal and it is a recent negative development which would have a very serious consequence on the wildlife biodiversity. Bale Mountains National Park (BMNP) is recognized as a biodiversity hotspot. 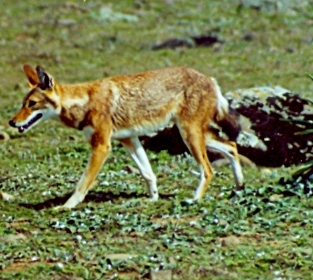 The endemics Ethiopian wolf (Canis simensis) and Mountain nyala (Traglaphus buxtoni) which are flagship species have also showed remarkable increase in Bale Mountains National Park as compared to their population in earlier worst years. The adult and sub-adult population of the Ethiopian wolf from Bale Mountains National Park (BMNP) showed a positive trend in population size from 150 in 1991 to 300 in 2008, but then fall to about 200 in 2009 due to an incidence of rabis. In BMNP, Mountain nyala has stabilized at a population size of 1200 in recent years while Elephant population in Babille sanctuary has stabilized at about 324 from less than 60 some 10 years ago. Positive trend is observed in the populations of an endemic Swaynes hartebeest in Senkelle Sanctuary though its habitat is gradually shrinking from settlement and agricultural expansion.

As a means of minimizing conflict of interest between parks and the surrounding communities, provision of employment opportunities to the community (e.g. employment of scouts) through waiving criteria for recruitment is a positive development to enlist communal support for the conservation efforts.