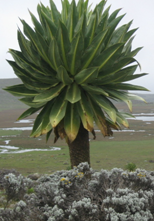 Ethiopia is endowed with rich flora and funa, due to its’ physical and climatic diversity. The total number of vascular plants is estimated to be more than 6500 species out of which an estimated 10% are endemic and about 14% are used as medicinal plants. The deforestation rate of the high forest ranges from 150,000 to 200,000 ha per year. Being part and parcel of the ecosystem, medicinal plants are being lost probably with the same rate of destruction. In order to salvage the medicinal plants, a Field Gene Bank (FGB) was established in August 2001 at Wendo Genet to conserve threatened, endangered and rare medicinal plant species. 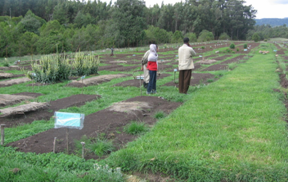 Three Institutions, Institute of Biodiversity Conservation (EBI), Essential Oils Research Center (EORC) and Ethiopian National Traditional Medicine Preparation and Study Association (ENTMPSA) have been actively participating in the establishment and follow up of the FGB; which is being coordinated by EBI.

The site is easily accessible and has a surface irrigation facility. The garden is subdivided into blocks to accommodate plants with different habits i.e., annual and perennial herbs, shrubs and trees. There are also blocks for nursery and shade loving plants.

The stakeholder institutions prioritized medicinal plant species and the sites from which the medicinal plants were to be collected. Thus, priorities were given for:

Future plans of the FGB are to:- 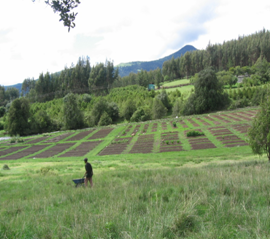 In Ethiopia about 80% of human population and 90% of livestock rely on traditional medicine. Medicinal plants are also seen as an economic commodity for some members of the society who make their livelihoods on their collection, trade or through use for treating patients as traditional medical practitioners/healers. However, the medicinal plant diversity is being depleted due to man-made and natural calamities.

In light of the importance of these resources that provide the health care needs for the majority of human and livestock population in Ethiopia, and also the fact that medicinal plants could be used as source of income, the Institute of Biodiversity Conservation (EBI) has initiated the development of a World Bank supported Project called Conservation and Sustainable Use of Medicinal Plants Project (CSMPP) in October 2001 with relevant stakeholders.

In order to salvage and the medicinal plants of the BMNP and its surroundings, and as well as those which are grown in similar agro-ecological zones of the country , a Field Gene Bank (FGB) was established with the financial support of CSMPP at Bale Goba to conserve threatened, endangered and rare medicinal plant species.

Bale Goba Medicinal Plants Field Gene Bank (FGB) is situated near Goba town in the Regional Government of Oromia, around 458 km south of Addis Ababa. It is located at 40028’3″E and 6058’39″N. Its average altitude is around 2722 m.a.s.l The area of the FGB is 30,000m2 (3ha).The site is located around 3.5 km from Goba town on the way towards Dello- Mena. It is near the River Togona which provides irrigation water to the FGB. The FGB is subdivided into blocks to accommodate plants with different habits. i.e. annual and perennial herbs, shrubs and trees. There are also blocks for nursery and shade loving plants.

The FGB was established in August 2004 to conserve threatened, rare and endemic medicinal plants found in and around BMNP and other other medicinal plants collected from other highlands of the country ( > 2000 m.a.s.l) as well as to complement the in-situ conservation which has been conducted by Oromia Agricultural & Rural Development Bureau of the Oromia Regional Government.

EBI with traditional healers of Adaba, Dodola, Sinnana-Dinsho, Goba and Mena–Angetu districts/wereda prioritized the medicinal plant species and the areas from which the materials are to be collected. In addition to this, the biological survey report of National Herbarium, Addis Ababa University, and as well as the threatened species listed by graduate students of the departmentof Biology, Addis Ababa University, were given due attention during the collection of medicinal plants.

Collection priorities were given for:

So far 248 medicinal plant accessions were collected in three collection missions from Adaba, Sinnana- Dinsho, Mena-Angetu and Goba in collaboration with the technical assistant of the FGB and with the traditional healers of each Wereda. Among the 248 collected medicinal plant accessions 109 were Herbs, 79 shrubs, 39 trees and 26 were climbers.Currentely, a total of 127 herbarium specimens were collected and handed over to the National Herbarium, Addis Ababa University, for authentication and taxonomic identification.

Part of the FGB is reserved for the tradional healers of Goba wereda to plant their own collection of medicinal plants and for the plantation of indigenous tree species like Hagenia abyssinica, Afrocarpus falcatus , Olea europaea and Juniperus procera and others